A number of photos have recently been circling the Facebook-Twittersphere about the trash at the Traverse City National Cherry Festival. As a counselor and psychologist, I’m interested in the human behavior behind the problem.

I’ve traveled throughout Haiti, Nepal, Thailand, and much of South America. In those travels, I’ve observed how different cultures view trash.

What happened in Traverse City at the National Cherry Festival was that after fireworks, air shows, and the 4th of July, people left piles of trash on the northern Michigan beaches. Here are a few observations and best-practices that we can all learn from.

Here is an awesome video about one way to make throwing trash away more fun.

The psychology of trash is a broad discussion. Like many areas of life, humans usually do what is most convenient. However, humans also weigh the negative or positive consequences (personal morals, a feeling of guilt, a feeling superiority, avoiding a ticket, etc.) against that convenience.

Companies like Disney even have holes in the bottom of trash cans with vacuums so that trash is immediately sucked away! Thus, clear and obvious large receptacles and signage can increase individuals compliance with keeping an area clean.

In Malcomn Gladwell’s book, The Tipping Point: How Little Things Can Make a Big Difference

For example, in the 1980s and 1990s, the subways of New York City were plagued with crime. The New York police commissioner took a new approach by halting fare jumpers (people who did not pay for the subways). Police found that a substantial number of individuals that were caught for jumping fares actually were armed and had warrants for their arrest.

Humans tend to match their behavior with the expectations around them. Thus if trash is overflowing and empty water bottles are on the beach, people tend to mirror other’s behavior, even if they normally would not.

A 2008 study by Eindhoven University Technology found that engaging trash can designs served to active personal prompts to prosocial behavior (people threw their trash away). Numerous approaches to increasing positive behavior have been implemented around the world, including turning stairs into a piano to encourage people to avoid an escalators (see video below):

Rather than blame visitors and treat them in a hostile way, let’s take some ownership for helping to create dynamic and smart solutions to this Traverse City issue. 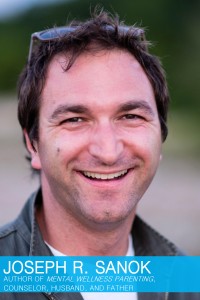 Joseph R. Sanok, MA, LLP, LPC, NCC is a counselor at Mental Wellness Counseling, a Traverse City Counseling practice that helps angry kids, frustrated parents, and distant couples. Joe also cares about the Traverse City area, helping people to be happier, and not get so upset. Life is wonderful and he wants to help create a world that is more peaceful, happy, and fun. To contact him, email him through the website: Contact Joe.