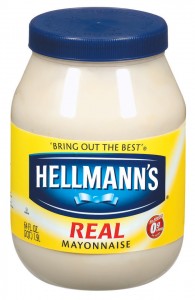 It all started when we were shopping for mayonnaise. I mean, we didn’t go to the store just for mayo, it’s not like we have an all mayo diet, but it is now known as the “Mayo Incident.” I would say that it started years before that incident, but it was the catalyst.

We had been married a month. I was determined to live frugal so that we could make ends meet. My wife knew that I was frugal and wanted to establish that we could have fun in life. I saw it as an opportunity to focus on living poor, so as to be rich later. She saw it as a quality of life issue. We both entrenched into our positions. I wanted the generic mayo that was fifty cents cheaper, she wanted to “bring out the best.”

I “won”, in that we got the off brand. She then decided that she would only eat sandwiches with mustard. I was stuck eating crappy mayo. Finally, after two months, I caved, threw it out, and we have had Hellmann’s ever since.

When I step back from the Mayo Incident, I see patterns that we have both sought to overcome. She has recognized that she did not make financially sound decisions in the past, whereas I realized that I have missed out enjoying the fruits of hard work. I don’t know exactly how we each arrived at those unique positions, but somehow, somewhere, we did.

Our first year of marriage was rough; it was not the bliss we imagined. We had to struggle through many other areas we had entrenched ourselves. What helped us was finding a common goal to work toward that was bigger than either of our own personal agendas. When we focused on where we were going as a couple, it made more sense to step back from our entrenchment.

I think this is also true in work and friendships. So often, I see that I am distracted by the present situation, that I don’t look at the broader goal. For example, I just started learning about ways to expand my counseling practice. My thought was, “If I could someday make money in a passive way, then I could spend more time with my family and not work as hard.”

That’s a good thought, but I found that instead of playing with my cute 11-month daughter, I was on Twitter, Facebook, building a website, and listening to podcasts on passive income. I had lost sight of the goal. I was giving up family time to have more potential family time.

Now I have shifted to trying to only reply to emails/Twitter/Facebook when my daughter is asleep and after my wife and I have had time together.

I think that I’ll always struggle with the balance of new, exciting projects and family time. But it is helpful to see what is happening, step back from my current project and look at the real goal. In that way, I hope to avoid another Mayo Incident and work toward my true direction I am seeking.

Joseph R. Sanok is the owner of https://www.mentalwellnesscounseling.com where he helps angry kids, frustrated parents, and distant couples. He also helps private practice clinicians be more awesome through his blog http://www.practiceofthepractice.com, where he discusses marketing, running a business, and setting up a website.

Joseph R. Sanok, MA, LLP, LPC, NCC is a counselor, therapist, psychologist, and overall helper of people in Traverse City, MI. He has professional experience working with Community Mental Health, residential facilities, foster care, and private practice. As well, he is the author of the book “Practice of the Practice: Basics for Launching Your Private Practice” due to be released in June 2012. He is a frequent speaker and writer locally in Traverse City, Michigan, and nationally.